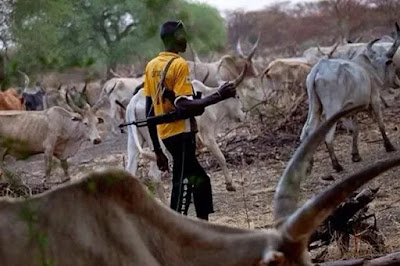 Residents of some communities in Ovia North East Local Government Area of Edo State on Thursday evening marched to the Government House, Benin City, with the corpse of one of the slain farmers killed by suspected herdsmen in the state.

The protesters said they were in the Government House to draw the attention of Governor Godwin Obaseki to their plight.

They complained that the police officers that came to their community after the attack “merely told them to go and deposit the body in the mortuary”.

Michael Idahosa, who spoke on behalf of the protesters, said the communities could no longer bear the incessant attack of killer herdsmen on the farming community, adding that “they had decided to bring the dead body to Government House for Mr Obaseki to feel their plight”.

“We are here to protest the killing of (by) herdsmen in our communities. The governor came to Ovia North East in 2017 when herdsmen killed one of our persons and promised to tackle the problem of herdsmen in our local government area, but the government did not,” Mr Idahosa said.

The residents gave the state government a three-day ultimatum to ensure the security of lives and property in the state.

The state Deputy Governor, Philip Shaibu, who received the protesters, assured them that the government would intensify efforts at providing adequate security to check the rising spate of insecurity in the state.

Sacked Ganduje’s Aide, Yakasai Is In Our Custody – DSS Admits