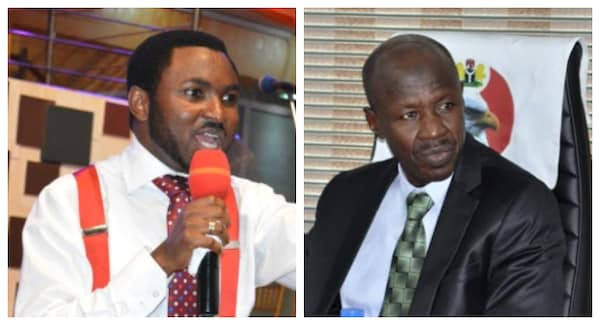 As the saga unfolds, it is wise to only say and write about what you are sure about, to avoid serious litigation.
Prophet Omale, the General Overseer of Divine Hand of God Prophetic Ministries, Abuja, has sued the News Agency Of Nigeria (NAN), over a report he described as malicious, derogatory and libelous with the caption – “HOW MAGU USED ‘PASTOR’ TO LAUNDER RE-LOOTED FUNDS ABROAD – REPORT”.
[irp]
A letter written by his lawyer, Chief Gordy Uche (SAN), said the report “reeks of calumny, denigration, actuated by malice, and calculated to ridicule and disparage him, and clearly a hatchet job ingeniously crafted to cast a stain on his reputation; expose him to public hatred and contempt and injure him in his religious calling, as the General Overseer of Divine Hand of God Prophetic Ministries International.
“Our client’s attention has been drawn to the extremely malicious, derogatory and libelous publication with the caption – ‘HOW MAGU USED ‘PASTOR’ TO LAUNDER RE-LOOTED FUNDS ABROAD – REPORT’ by your Reporter, one Isamaila Chafe, on the 11th day of July 2020.
“We, however, wish to make the following clarifications to put the public records straight:
1. That our client is the General Overseer of an Inter-denominational/Multi-religious Prayer Ministry, which Mr. Ibrahim Magu attends.
2. That our client, only visited Mr. Ibrahim Magu in a Hospital in Dubai, United Arab Emirate, sometime in March 2020.
3. That our client never laundered any funds whatsoever for Mr. Ibrahim Magu, nor for anybody whatsoever.
4. That our client does not own any foreign bank account anywhere in the world.
5. That there are no funds whatsoever traceable from Mr. Ibrahim Magu to our client’s Bank accounts whatsoever neither has our client received any funds whatsoever from Mr. Ibrahim Magu. Our client has never received any funds whatsoever from anybody on behalf of Mr. Ibrahim Magu.
6. That our client does not own any property in Dubai. His name was never used to purchase any property whatsoever in Dubai, United Arab Emirate or anywhere else in any part of the world, neither has he purchased any property or properties for Mr. Ibrahim Magu in any part of the world whatsoever.
[irp]
“We wish to state that by reason of the said libelous publication which was read by millions of persons all over the world, our client has been severely injured in his reputation, character and calling. Our client has thereby been brought into ridicule, public scandal, hatred, denigration, odium and contempt, and lowered in the estimation of right-thinking members of the society.
“We therefore, demand the immediate retraction of the libelous publication by way of an unequivocal APOLOGY to our client prominently published in at least three (3) National Newspapers not later than 7 (Seven) days from the date of your receipt of this letter and that you restrain from further defamation of our client forthwith otherwise, a libel suit against NAN will commence you, your Organization, claiming the sum of N1,000,0000,000.00 (One Billion Naira) as exemplary, aggravated, general damages for defamation, and for injunction if you fail to comply. 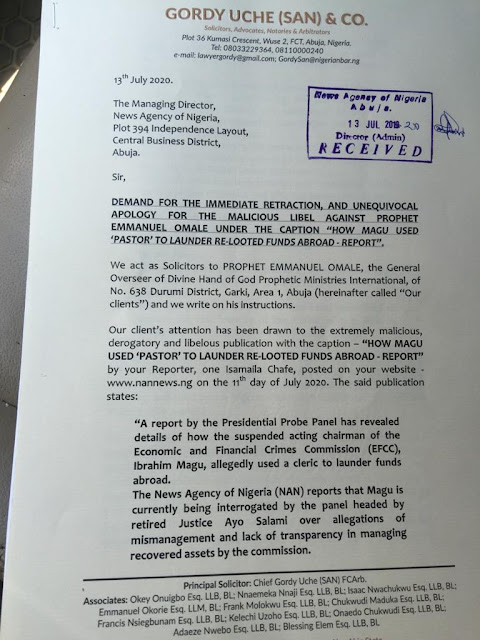 “Further take notice that this letter constitutes our formal notice of intention to sue.”

99% of terrorists are Nigerians - Buratai