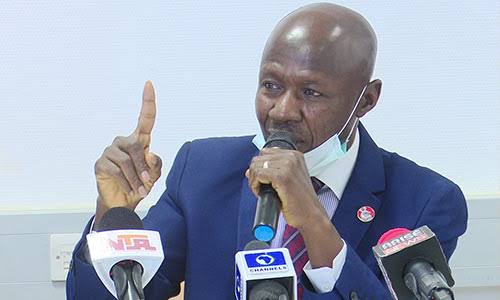 The suspended acting chairman of the Economic and Financial Crimes Commission, Ibrahim Magu, on Monday appeared before the Justice Ayo Salami-led presidential panel for the second week running.
Magu has been appearing before the panel sitting inside the old Banquet Hall of the Presidential Villa, Abuja, since last Monday when he was arrested.
[irp]
He has since then been in police custody from where he is being moved to the venue of the sitting daily.
Meanwhile, the Nigerian Financial Intelligence Unit has presented its investigative report on Magu to the panel.
It was gathered that the NFIU provided a comprehensive report on Magu’s alleged activities, including details of his relationships with some Bureau de change operators to the panel.
It was gathered by The Punch that the NFIU kept report of all concluded investigations on its servers or cloud storage system where the chances of tampering or theft were low.
Speaking on condition of anonymity, an official said, “Almost 100 per cent of our reports and information are on our servers; you cannot find any concluded reports on computers, they are on our servers or cloud storage system.”
The official dismissed reports that the attack on the agency’s annex office at Wuse, Abuja, might be related to the Magu’s case.
[irp]
He said the ongoing internal investigation would reveal the culprits behind the burglary.
The source stated, “Apart from the so-called Magu investigation, we have bigger and sensitive investigations based on our mandate, so you cannot conclude that the burglary has to do with Magu, but as far as NFIU is concerned, all the information the panel required had been provided.”
Policemen and private security guards protecting the NFIU facility had been taken into custody for questioning.

99% of terrorists are Nigerians - Buratai