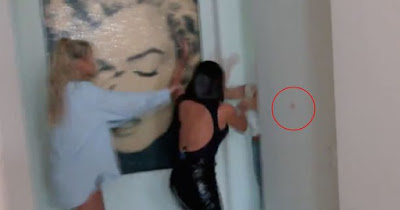 That epic brawl between the siblings left fans shocked when it was shown on Keeping Up With The Kardashians.
But now, some eagle-eyed viewers have noticed evidence that proves just how vicious it was.
Kim and Kourney were screaming at each other and slapping each other after an argument turned physical.
Sister Khloe desperately tried to get between them and pull them apart, but they continued to fight, spilling from the room they were in to the corridor.
[irp]
At one point, Kourtney slapped Kim so hard across the face that she crashed into the wall, leaving a smudge of make up behind.

Kourtney Kardashian slapped her sister Kim so hard that her make up transferred to the wall!

Army General spotted in a viral video complaining about Boko Haram insurgents having more ammunition, allegedly relieved of his appointment

Orlando Bloom can't wait to have a baby with Katy Perry

If you ask me for help in 2020, your life will spoil and you will die – BBNaija's Khloe