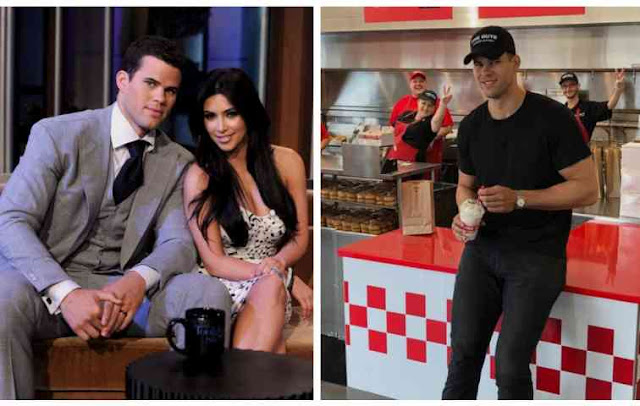 And it’s a good thing for him. Recall that 9 years ago, Kim Kardashian was a vision in Vera Wang, floating down the aisle to marry her Prince Charming, Kris Humphries, in a £6million wedding.

But as soon as they landed on Italy’s Amalfi Coast for their honeymoon, she realised she’d made a grave mistake and after 72 days, Kim filed for divorce.

It later emerged that with just 90 days between the proposal and ceremony, the couple hadn’t even spent a full week together before tying the knot.

Kim’s sister Khloe, 36, reportedly got herself briefly uninvited from the wedding for voicing her doubts, and at the service she was allegedly heard muttering: “I give it six f**king months.”

NBA star Kris, meanwhile, was devastated and responded to Kim’s divorce application by filing his own request to have the marriage annulled on the grounds of ‘fraud’.

Kris, 35 – who popped the question with a 20-carat, £1.5million engagement ring – believed Kim had used their nuptials for ratings.

And while their marriage lasted 72 days, their divorce battle rumbled on for two years, ending in June 2013, just weeks shy of Kim giving birth to her first child, daughter North, seven, with Kanye West.

Kris eventually sold the engagement ring at auction for £570,000 and tried to move on. But in an open letter, he laid bare his torment over being ‘that guy’.

An accomplished sportsman in his own right, after the divorce Kris was mocked, booed and jeered at on court and branded his marriage and divorce ’embarrassing’ and ‘brutal’.

“I never wanted any of this,” he penned in an emotional essay for The Players’ Tribune last year.

“My whole life, I just wanted to be remembered as a great athlete.”

But he insisted his eight-month courtship with Kim was genuine, adding: “There’s definitely a lot about that world that is not entirely real. But our actual relationship was 100 percent real.”

After his divorce, Kris said his mental health nose-dived. He started suffering from acute anxiety, especially in crowds, and locked himself away.

“There was about a year where I was in a dark place,” he said.

Kris quickly retreated from the celebrity spotlight and last year retired from basketball and returned to his hometown in Minnesota.

He now runs a chain of seven Crisp & Green restaurants across the Midwestern United States and has opened more than 10 Five Guys burger franchises.

Believed to be single, a look at his Instagram account reveals how he spends his downtime with family, friends and his adorable two dogs Brodmon and Motto.

“Kris tries to stay as far out of the spotlight as possible,’ a source told US Weekly in 2018. “He’s enjoying the single life.”

But while there’s undoubtedly no love lost between Kim and Kris, they will forever be binded by one thing – the secrets they keep.