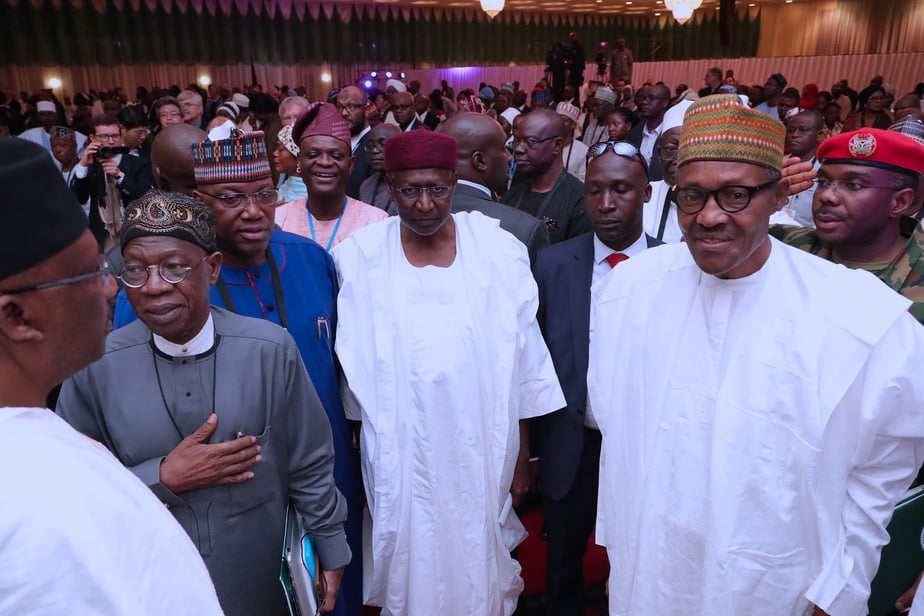 Abba Kyari before his demise, was chief of staff to Nigeria’s President Muhammadu Buhari and a very prominent and influential member of the cabinet and administration.
On 24th of March 2020, Abba Kyari tested positive to Covid-19 after he returned from an official trip in Germany.
Mr Kyari had travelled to Germany on March 7 to meet with officials of Siemens AG in pursuit of the deal recently signed between the Nigerian government and the energy company and returned about a week later. He is suspected to have contracted the disease while there.
The chief of staff, was in Europe alongside the power minister, Saleh Mamman, returned to the country on March 14.
Mr Kyari’s death is believed to be among the four new deaths announced by the Nigeria Centre for Disease Control (NCDC) late on Friday.
The NCDC said Nigeria’s death toll increased to 17 on Friday from 13 on Thursday.
Nigeria has 493 confirmed cases of COVID-19 including the 17 deaths while 157 people have recovered and have been discharged.
Mr Kyari was first appointed chief of staff to the president in 2015 when Mr Buhari came to power. He was reappointed last year after his principal won reelection.

Abba Kyari obtained a Bachelor of Arts Degree in Sociology from the University of Warwick, England, in 1980. He obtained a Bachelor of Arts Degree in Law from the University of Cambridge, England and was called to the Nigerian Bar in 1983. In 1984, he then proceeded to obtain a Masters’ Degree in Law from his alma-mater, the University of Cambridge.
Between 1988 and 1990, he was Editor with the New Africa Holdings Limited Kaduna, (publishers of Democrat Newspapers). He served with the Borno State Executive Council as Commissioner for Forestry and Animal Resources in 1990 and was Secretary to the Board of African International Bank Limited, between 1990 and 1995.
He attended the International Institute for Management Development at Lausanne, Switzerland, and participated in the Program for Management Development at the Harvard Business School, in 1992 and 1994 respectively.
Abba Kyari was Executive Director, Management Services, United Bank for Africa Plc. (UBA) and later the Managing Director and Chief Executive of the Bank. He was appointed a Director of Unilever Nigeria Plc. in 2002.
He served as Honorary Member of the Presidential Advisory Council on Investment in Nigeria between 2000 and 2005. He was a recipient of the Nigerian Honor Award of Officer of the Order of the Niger (O.O.N).
The Nigerian President issued the following statement early Saturday announcing the demise of the Chief of Staff to the President, Abba Kyari.
CHIEF OF STAFF TO PRESIDENT, ABBA KYARI, PASSES ON
The Presidency regrets to announce the passage of the Chief of Staff to the President, Mallam Abba Kyari.
The deceased had tested positive to the ravaging COVID-19, and had been receiving treatment. But he died on Friday, April 17, 2020.
May God accept his soul.
Funeral arrangements will be announced shortly.
Femi Adesina
Special Adviser to the President
(Media and Publicity)
April 18, 2020
Abba Kyari who was reported to be attending series of meetings with President Buhari, VP Osinbajo, the Minsters and the Federal Executive Council after his trip from Germany.
Kyari’s blood sample was taken on Saturday despite the fact that he showed no symptoms of Corona Virus. However the result came out positive the following Monday.

According to the Information by Council on Foreign Relations, the Late Abba Kyari was born in 1938, and had generally been in poor health.
Kyari’s title is mallam, an indication that he is an Islamic scholar. He has also had extensive schooling in Europe and the United States, including at the University of Warwick, Cambridge University, the Institute of Management in Lausanne, Switzerland, and at Harvard. He is trained as lawyer, and had a successful career as a banker.
Unlike President Buhari, who identifies as a Hausa-speaking Fulani, Kyari was Kanuri from Borno, the state most afflicted by the radical, Islamist insurgency Boko Haram. Presumably his first language is Kanuri, and his English excellent.
Kyari was the gatekeeper to the president, who had ordered that all cabinet requests come through Kyari to him.
Kyari was overseeing the movement of paper into and out of the president’s office and the president’s schedule. He attends virtually all of the president’s meetings, photo-ops, and press briefings.
Kyari is regularly in personal touch with virtually everybody at the top of Nigeria’s political and economic establishment. He has been reported to have regular, even hourly, contact with the president.