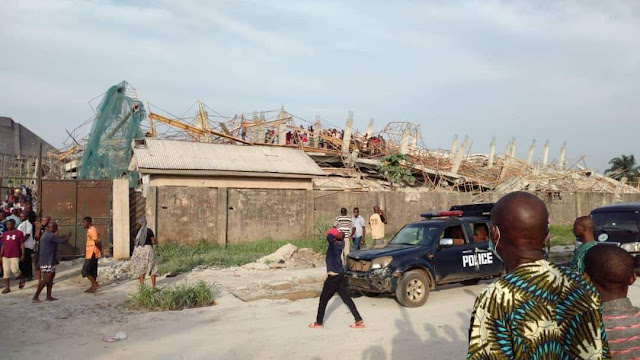 About 40 workers are said to have been trapped in an ongoing construction of an eight-story building that collapsed at Yar’adua drive in Owerri, Imo, on Thursday.
Journalists were at the scene of the collapsed building where excavation of those of the trapped workers are still in the process at about 7:01 pm yesterday.
[irp]
At the time of filing this report, about ten were said to have been rescued with seven severely injured and taken to hospital, just as they said, for now, two feared death.
[irp]
Many issues were raised by some of the survivors, which could have led to the building collapse. One said the pillars were very weak, adding that the pillars holding the eight-story building were not also enough to carry the weight of the entire structure.
They also said that a few days ago they noticed cracks in some parts of the building and complained to the engineer who assured them he would do something about it.
However, members of the Red Cross were seen at the scene assisting in the evacuation of both the death, moving some to hospitals for immediate medical attention.
Spirited individuals moved in as Vanguard noticed that some of them are aware of the locations of those trapped as they assisted in the rescue operation. 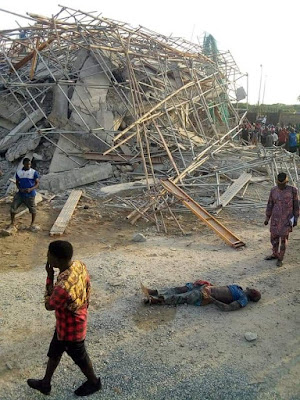 At the time of filing this report, one of the survivors, who introduced his name as Prosper, said that at the moment they were nine in number that have survived. Five have been taken to the hospital who sustained various degrees of injuries.
According to Prosper, “I was very close to the building when I heard a crack around the pillars and I started running and before you know it it is like a sound of a bomb. The story building fell down.
“We are working in different departments I can’t count the actual number. We are many. We may be up to 40 in number. They have taken five people to the hospital. They were badly injured.”
**