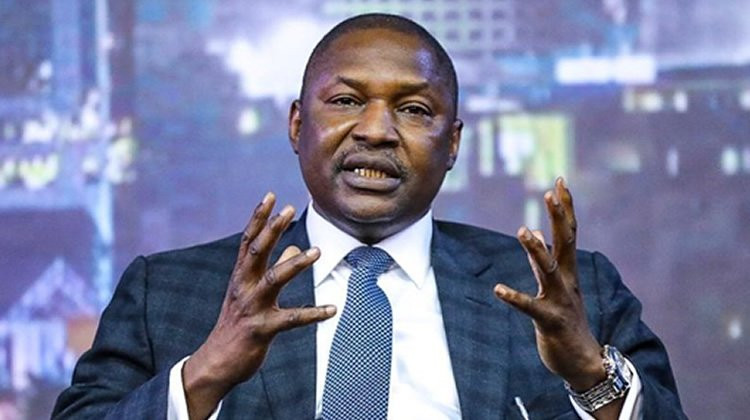 The Attorney-General of the Federation, Abubakar Malami, has said that it is premature to say that live bullets were fired at protesters during the October 20, 2020 shooting at the Lekki tollgate.

The Lagos state panel of Inquiry on Police Brutality and EndSARS in its report released on November 15, described the October 20, 2020 shooting at the Lekki tollgate as a massacre. The report also indicted the Nigerian Army and Police of carrying out the ”massacre” on the unarmed protesters who gathered at the tollgate to protest police brutality. The Lagos state government in its white paper released on Tuesday, November 30, rejected the findings of the panel.

In an interview with Channels TV, Malami averred that the report is not “conclusive” of the true position of what transpired on October 20, 2020, and so it will be premature to conclude that live bullet were fired on protesters.

“You (referring to the presenter) are jumping into a conclusion that live ammunition was indeed used during the #EndSARS. Whether the report said so or it does not say so, as far as I’m concerned, I’m not in the position to ascertain because whatever it is, one, you said there was a report.

Within the context of the white paper too, you have criminal investigations that must naturally follow through the process of prosecution when the need arises.

With or without the report, what I’m trying to say in essence, the report, in its own right, cannot be conclusive in establishing a position.

There are still additional layers of administrative and judicial processes that would follow before you can jump into a particular conclusion establishing a point criminal or otherwise.

I think as far as the report, in its own right, it is not conclusive of a provision of what truly transpired against the background of your submission that part of the report was indeed rejected by Lagos state government.

And certainly, there are other investigative components that may at the end of the day translate to criminal prosecution and as such, it is indeed very premature for you to jump into conclusion that live ammunition was used.