Nearly 300 people have tested positive for Covid after going to or protesting at UN climate summit COP26 in Glasgow this month.

Speaking at Holyrood on Thursday, Nicola Sturgeon said: ‘I can confirm that there is no sign so far of any significant spike in cases associated with Cop.

‘Rigorous measures were put in place to minimise the risks of Covid transmission. 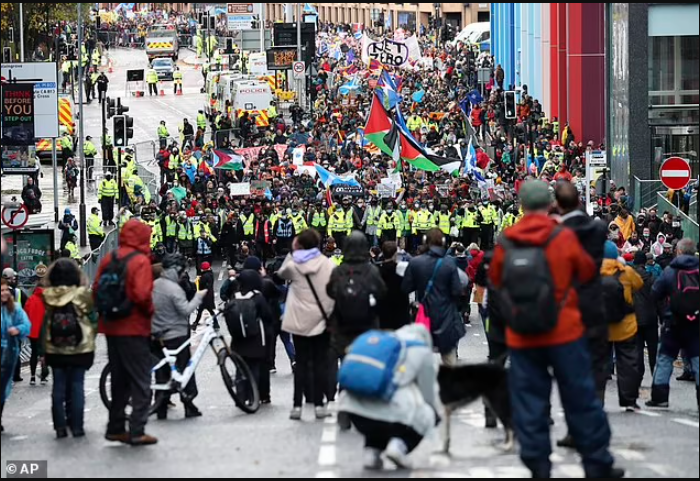 ‘For example, anyone entering the main summit site – the Blue Zone – had to provide evidence of a negative lateral flow test result.

‘Information published earlier today by Public Health Scotland suggests that of the people officially affiliated with Cop26, approximately four in every 1,000 tested positive for Covid through routine lateral flow testing.’

The First Minister added: ‘All of this suggests that the mitigations put in place were effective.

‘I want to put on record my thanks to delegates for their compliance and indeed to everyone who worked so hard in the run-up to and during Cop26 to secure the safest possible environment.’

The findings from Public Health Scotland (PHS) assessed the number of people who reported to Test and Protect that they had been to an event related to the climate summit, including workshops and protests outside the Scottish Events Campus in Glasgow.

PHS also estimated that just four out of every 1,000 people in the conference centre itself tested positive for the virus.